I reserve the right to be excited by this one; in fact pretty much everyone's gone "oooooh" when they've seen it. Last week I received the author copies of Learning Ext JS from Neel at Packt, and the book looks great. I'm going to talk a little bit about the way I approached the writing, and how I feel about it all after the fact. 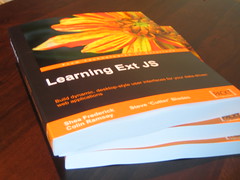 Each chapter which I wrote was supposed to be around 25 pages, consisting of 6000 words. When I write a blog post, a good one is around 1000 words, so that was my comparison. I've not done any real writing since high school, so while I've continued to put out a lot of words, they've never been particularly well thought out, scheduled, or planned in any way. So six thousand words a chapter did cause a bit of a problem when I tried to churn out a few pages every night.

One of my techniques was similar to one of my main development ideas - don't get bogged down in thinking how something should be done in the perfect way; just get started and refactor later. In this case, change refactor for edit, but you get the idea. I suspect this is writers block, and it was definitely a problem for me. Pushing on and getting something down turned out to be much more productive than mulling over "better" ideas. Another problem wasn't necessarily thinking what to write, but making each chapter stretch out to the required number of words. Quite often I'd have a good couple of evenings when the writing was going well only to find that I'd underestimated how far an idea would stretch. In these cases I'd try and go in to detail on working with the subject matter or I'd think up another example to try and illustrate my points in a different or more advanced way.

Even when the initial drafts were completed, there was still a matter of sending them off for review. Editing sounds like it's going to be the easy bit, but when you've been working on something for a few months you're most likely sick of the sight of it, so revisiting it isn't going to be high on your agenda. Still, it was an education reading over comments about my own writing, bringing me down to earth or giving me a buzz depending on how each chapter and paragraph was received. How often do you really get an outside, independent person to review your work?

Even when the edits were complete, there was still more: promotional material to be written, screenshots and code samples to be made available, blog posts to be written. After all that, and a few extra weeks, the physical copies arrived in the post and pretty much made the whole harrowing process worthwhile. Writing a book was always one of those things I'd quite fancied doing and never imagined I would, so being able to contribute to Learning Ext JS ticks a pretty cool box for me.

Feedback or questions on this post? Create an issue on GitHub.